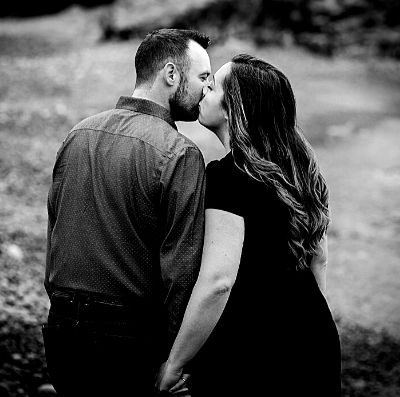 A fun loving couple from St. John’s, Linsday and Terry had an emotional engagement – after receiving a new-found respect for diamonds. Keep reading to see ‘the ring’ and why they’re so happy they chose local. 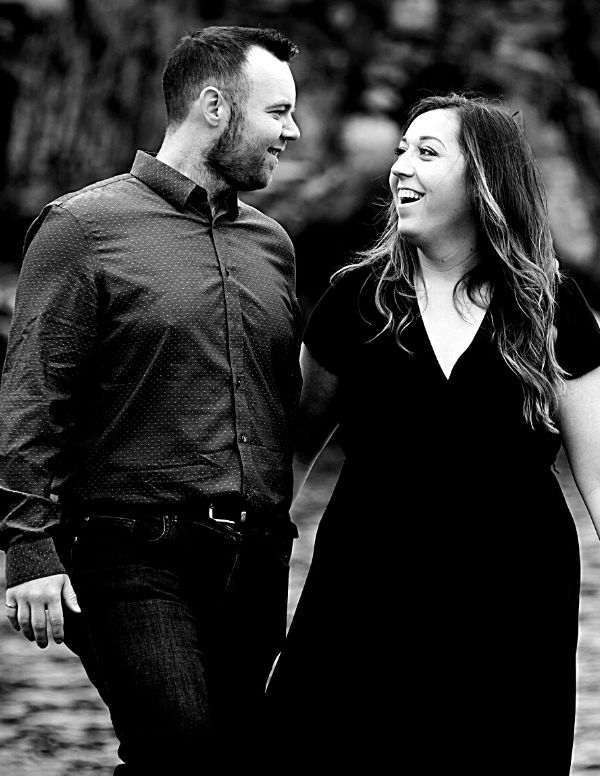 Lindsay and Terry explore their ring options together.

Our Design Consultant Rhonda met Lindsay and Terry several months before Terry proposed, when they visited Diamond Design to explore their options. Rhonda really enjoyed working with the fun couple.

Starting their journey by ring shopping together, the couple shared their budget and ideas with Rhonda, and explored the world of diamonds.

Our Design Consultants usually start a bridal appointment by showing an assortment of diamonds, and letting their clients pick the most beautiful.

It’s usually not the biggest diamond that catches their eye. All our diamonds are hand picked for their sparkle, brightness, and beauty – all of which are more important than simply how big a diamond is.

In fact, when a diamond has a superior cut, it will often be more beautiful – and less expensive – than other diamonds.

Lindsay was surprised by how much she learned from Rhonda. She came away from their consultation with a better understanding of clarity, colour, carat and cut. Most of all, she developed a better appreciation for how the 4Cs can work together to create a truly stunning diamond.

It’s this in-depth understanding of the full context of diamonds that allows our Design Consultants to help our clients navigate the 4Cs to find their absolute best choice. It’s why working with a Design Consultant creates such stunning results.

And Lindsay says she is happy that Terry involved her in the process.

“I think the process of us picking out my ring together was a little bit more special because it’s something that we’re doing together anyway. So it’s the two of us in there,” she says.

Learn More About the 4Cs

A Bunch of Tears

With a simple card, Terry creates a special moment in time.

Terry continued his diamond education when he circled back, by himself, to design Lindsay’s engagement ring.

“I learned a lot more about diamonds than I ever thought I would know,” he jokes. “Rhonda really helped me out because I wasn’t really sure what to be looking for.”

Terry popped the question in writing, with a card on Lindsay’s birthday.

“He always forgets the cards, and I love cards,” Lindsay remembers. “As I was reading, I’m thinking, ‘gosh, this is such a thoughtful card,’ because he usually buys funny cards.”

At the bottom of the card, Terry asked Lindsay to marry him, and when she turned around, he was on one knee.

“I about keeled over!” she says, laughing. “I cried for about ten minutes.”

And Terry didn’t get his answer right away.

Always good-natured and quick to laugh, the couple notes that although COVID-19 interrupted their wedding plans, that just gave them more time to pick out their wedding bands. They’re now planning to get married in December, because they love Christmas and winter.

“Brave for Newfoundland for sure,” Lindsay says, adding they’re hoping for just a light dusting of snow. 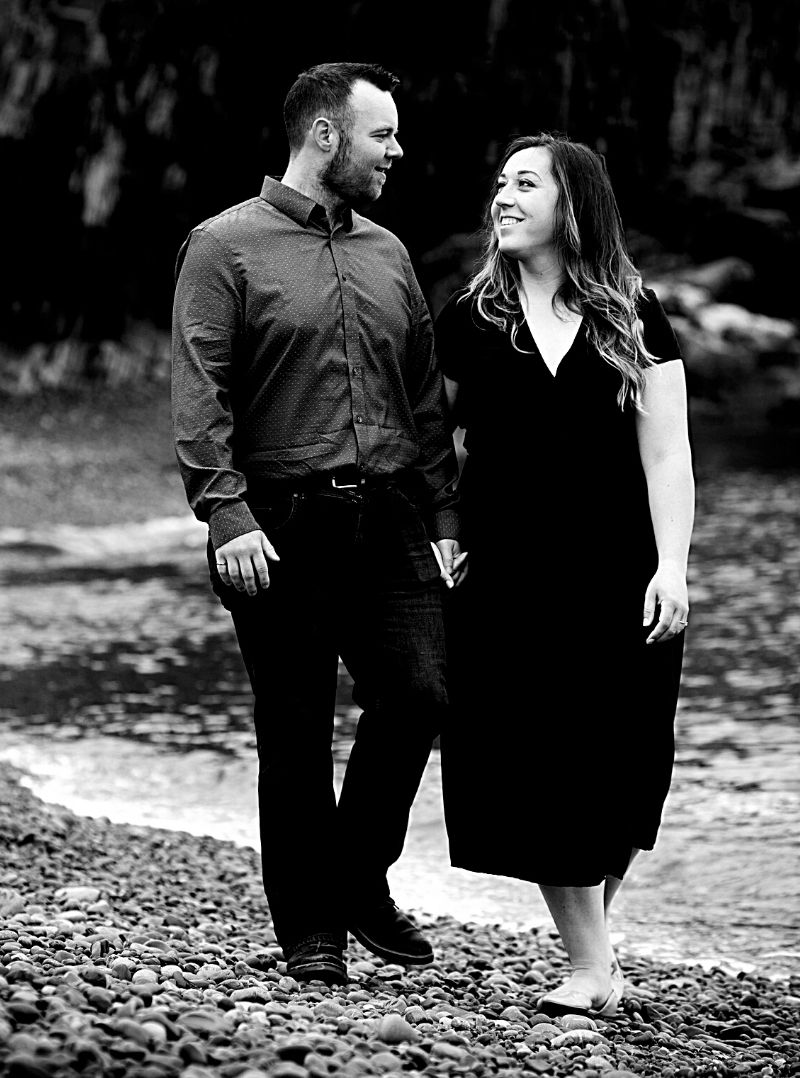 This Is
Your
Moment 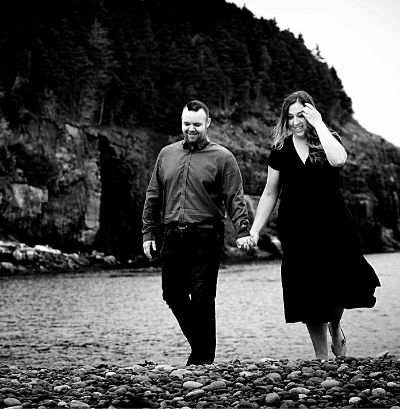 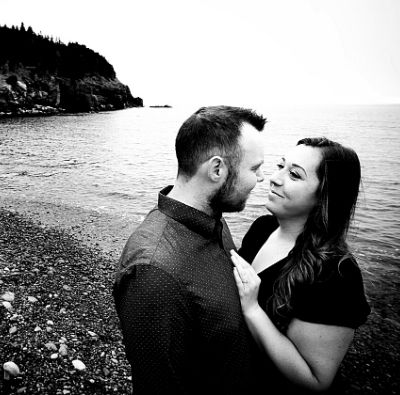 Why Lindsay and Terry are happy they chose local.

Terry reports that while ring shopping felt a little intimidating at first, Rhonda quickly put them at ease.

“It was one-on-one. There was just no pressure at all,” he says.

Now whenever Lindsay is in the area, she’ll pop in to get her rings cleaned and checked, and she says it’s like walking into a friend’s house.

“They’ll clean it and then we’ll chit chat. And they always bring it out on a nice pillow when it’s done being cleaned!” she says, laughing.

The couple love their rings, of course, but they also speak about how much they’ve valued the relationship they’ve built with Diamond Design.

Terry notes that some friends and colleagues have bought their rings online, but that he didn’t want to go that route.

“I wouldn’t buy a vehicle online and I wouldn’t put an investment in a ring online either,” he says.

Lindsay agrees. “Everyone always says ‘support local, support local,’” she says. “But when you go to Diamond Design, you’re not only supporting local, but you’re getting that local, small business customer service and hospitality. It’s that homey vibe, which makes me happy that we made that decision.”

So What About The Rings?

Lindsay and Terry find their engagment and wedding rings.

All About Wedding Rings At Diamond Design

The rose gold solitaire ring that Terry chose is classic and stylish, just like Lindsay wanted. She loves that it’s simple and elegant, joking that “he did a great job. And Rhonda did a better job helping him pick it out!”

The couple also chose their wedding rings from Diamond Design, during the height of the pandemic, thanks to Rhonda’s good notes and expert customer service.

Thankfully, they had been in to explore wedding rings prior to the shutdown. Lindsay emailed Rhonda to ask about her options. Rhonda let her know that she’d kept thorough notes, so that when they were ready to pull the trigger, she could get their rings built.

“Just another testament to their customer service,” Lindsay says. “It’s just always above and beyond.”

Joking that because Terry is a bit of a ‘Plain Jane,’ his wedding ring will be a simple platinum ring with a band of rose gold to match Lindsay’s engagement ring.

Lindsay reports that her family and friends couldn’t believe the sparkle of her beautiful engagement ring.

And she gets lots of compliments from strangers, too. She says that every time she’s in the airport, there’s always someone who comments on the sparkle.

“When that happens I just have to hold it up because it’s just so nice to show it off, that he was so thoughtful in picking it out.” 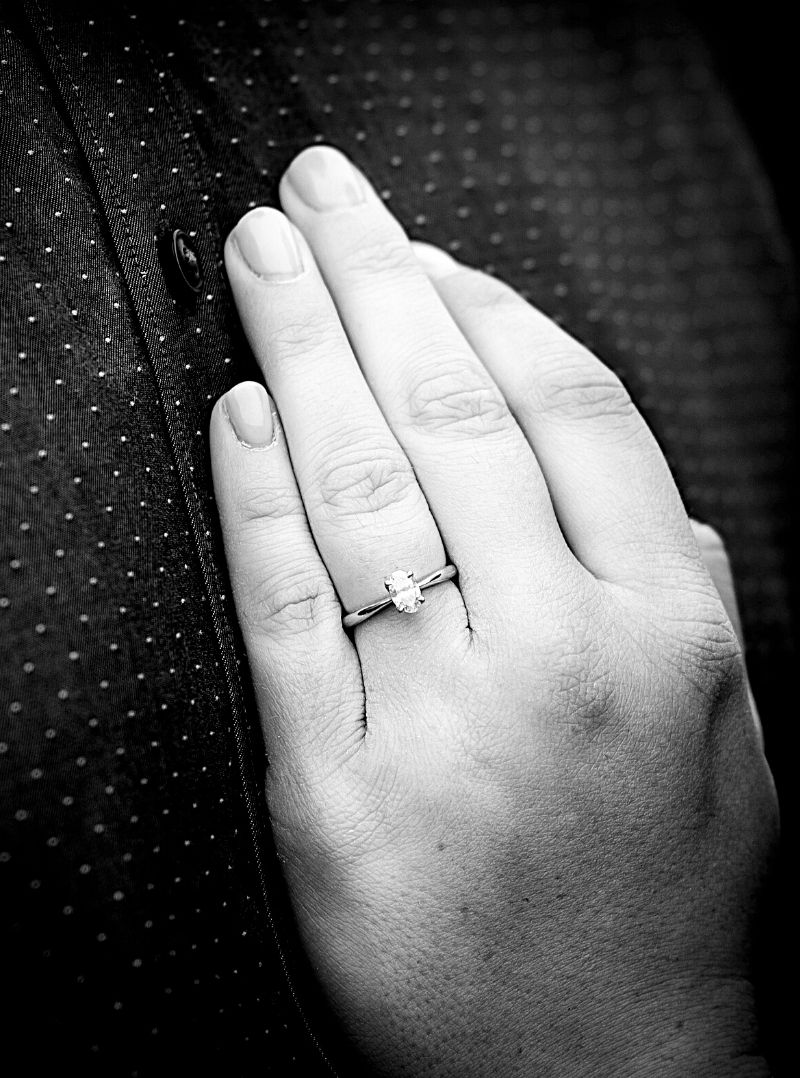 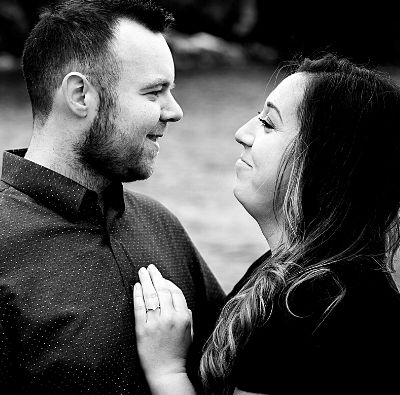 We recommend appointments for all bridal showings, to allow our Design Consultants time to focus on you.